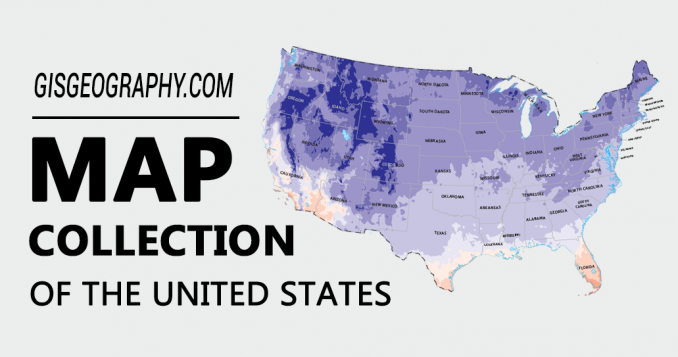 These are the defining maps of the United States. They explain what‘s where in America. Better yet, it’s the complete package of maps including everything from:

But do you want to know the best part? They are all free to use because the original source is the National Map.

We’re adding to it all the time so make sure to bookmark it and check-in!

Reference Maps of the United States

This is like a blueprint map of the United States with a plain and simple white background.

It shows major interstate highways, cities, and capitals for all 50 states.

Another key benefit to this United States map is how it includes major lakes, rivers, and mountains.

2 Detailed Map of USA with Hillshade

This map lays out a foundation with a beige-tone hillshade back-drop.

As a result, it carves the major mountain chains like the Rocky Mountains and the Appalachians.

If you want a plain and simple map of the United States, this one only shows state boundaries.

But it also includes state names and neighboring countries.

If you don’t want state names, then use the next map below.

In this map of the United States, it completely discards state names.

It’s just your 50 states of America with a white background.

This makes it an excellent printable map for fill-in-the-blank type of activities in classrooms.

This is an augmented map of the United States with a broad spectrum of colors.

Each state has an appropriate color to separate it from others.

By using a light pastel color palette, it gives a subtle tone to differentiate state boundaries.

The 50 States of America

What time zone do you live in?

By finding where you are on this map, you can instantly see which time zone you live in. Plus, you can see areas that do not observe daylight savings time.

For example, it has all 6 time zones like the Hawaii-Aleutian, Alaska, Pacific, Mountain, Central, and Eastern time zones.

This map is a simple state map with a white background.

But it pinpoints capital cities for all 50 states.

Each capital has a red dot including Hawaii and Alaska.

Which areas are federal lands in the United States?

Physical Maps of the United States

This satellite map details the “true color” extent of land in the contiguous United States.

It uses Landsat, a satellite program that’s been monitoring our planet 40+ years.

This composite image displays everything from forests, bare ground, deserts, and water in the conterminous United States.

Satellite Map of the United States

Hillshade maps are excellent for highlighting valleys and mountains.

In this case, you can see elevated and depressed regions in the United States.

For example, areas like the Rockies and San Luis Valley particularly stand out.

Hillshade Map of the United States

This map carves out the major rivers and lakes and names them.

For example, Rio Grande, Colorado, and Mississippi River are major rivers in the United States.

Rivers and Lakes Map of the United States

Each one bends, loops, and meanders with flowing water on the surface.

A way to use this map is to test your knowledge by filling in the river names.

Rivers and Lakes (No labels)

When George Washington was elected as the first US president in 1789, it became a moment forever ingrained in history.

From 1789-1808, these maps show the electoral vote for Democratic-Republican and Federalist parties.

In 1828, Andrew Jackson claimed victory over John Quincy Adams of the National Republican Party to become the 7th president of the United States.

Then in 1837, Martin Van Buren became president after serving as the eighth Vice President.

Finally, President William Henry Harrison was elected as president for only a month in office after dying from pneumonia. Consequently, John Tyler became the tenth President of the United States after filling in the role.

From 1844-1856, the lengths of the presidency were mostly short-lived.

For example, James Knox Polk served as the 11th president of the United States from 1845 to 1849.

This was followed by Zachary Taylor, Millard Fillmore, and Franklin Pierce as the 12th, 13th, and 14th presidents.

Terms as president ended early for both Lincoln and Johnson.

Lincoln was assassinated by stage actor John Wilkes Booth. Then, Andrew Johnson was impeached for “high crimes and misdemeanors”.

From 1876 to 1888, it was mostly a two-party race between the Republicans and Democrats.

Hayes, Garfield, Arthur, Cleveland, and B.Harrison were presidents in this time span.

The presidential elections between 1892-1904 recognized three US presidents.

In 1862, the Populist Party appealed to western farmers. But they could only win in states like Idaho, Colorado, and Kansas.

As shown in the 1912 election map, this was the first year to include votes from all 48 contiguous states.

From 1924-1936, the United States was mostly a two-party system with Republican and Democratic candidates.

The 1932 and 1936 elections colored almost the entire United States blue with substantial victories from FDR.

In 1940, Franklin D. Roosevelt was elected president during World War II until he died in 1945.

Finally, the 1952 election chose Dwight D. Eisenhower as the 34th president of the United States.

From 1956 to 1960, Eisenhower, Kennedy (JFK), L.B. Johnson, and Nixon were elected as presidents of the United States.

Both Hawaii and Alaska participated in 1960 representing the first election with all 50 states.

A notable event in this span was the assassination of John F. Kennedy (JFK), who was later replaced by Lyndon B. Johnson as the 36th president of the United States.

US presidents elected from 1972-1984 included Nixon, Ford, Carter, and Reagan.

In 1972, Richard Nixon won a landslide during this election. He gained 60.7% of the popular vote – only to be impeached in 1973. Then, Gerald Ford took his place.

Jimmy Carter from the Democratic Party served as the 39th president of the United States.

Finally, Ronald Reagan won 49 states (except for Minnesota) and was elected as the 50th quadrennial presidential election.

In 1988, George H.W. Bush was elected the 41st president of the United States.

Then from 1922 until his impeachment scandal, Bill Clinton served as president.

In 2008 and 2012, Barrack Obama was elected president for 2 consecutive terms.

This brings us to our current president, Donald Trump, who was inaugurated as president in 2017.

The next presidential election will be held in 2020 with Joe Biden from the Democratic Party making a run for president against Donald Trump.

For example, the lowest is only 2.3 inches per year in California’s Death Valley to a high of 460 inches on Hawaii’s Mount Waialeale.

Nevada ranks as the driest state, with an average annual precipitation of 9.5 inches. In contrast, Hawaii is the wettest, at 70.3 inches.

The relative humidity is a measure of how dry or humid the air is.

Coastal regions experience more moisture in the air because it can absorb the water directly from the ocean.

This map displays maximum temperature, which is the average highest temperature recorded daily.

In general, temperature decreases towards the polar region and increases closer to the equator.

This is why areas like Alaska and closer to Canada are colder. But states like Texas and Hawaii have a higher annual mean daily maximum temperature.

As you can see, states like Wyoming and Colorado have relatively cool climates because of its elevation.