All three types of maps represent quantities using dots (but it doesn’t necessarily have to be dot symbols).

While dot distribution maps use multiple dots to represent quantity, graduated and proportional symbol maps adjust the size of a single dot based on quantity.

The main idea behind proportional symbol maps is that a larger symbol means “more” of something at a location.

In a population proportional symbol map, New York will have a larger dot than San Francisco because it has a larger population. And this is also true for a graduated symbol map. 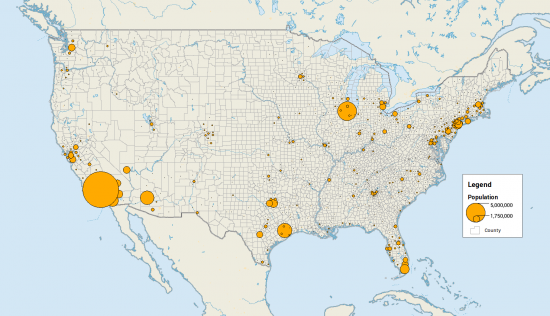 In ArcMap, you only set the size of the smallest symbol. From there, each symbol is scaled upwards reflecting the quantity.

If you use Flannery Compensation, it adjusts symbol sizes to compensate for the reader’s underestimated perception of the size of circular symbols.

For example, this graduated symbol map divides the population into 4 separate classes. And each of these classes has a specific size dot depending on where the county population falls in. 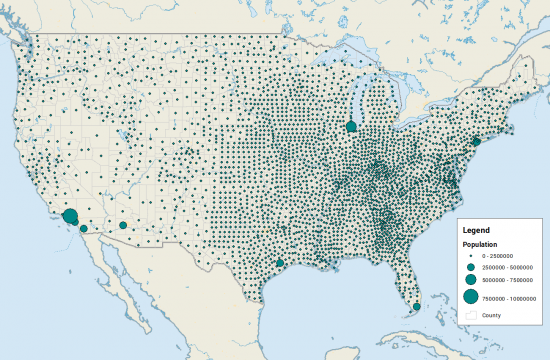 An advantage of graduated symbol maps over choropleth maps is that the size of the geographic feature doesn’t matter. When you shade by color, people tend to pay more attention to larger features. Often the case, smaller features can get overlooked.

And don’t forget that the symbol doesn’t have to be a dot or square. In general, it’s easier to compare circles and squares compared to other symbols.

Dot distribution maps (or dot-density maps) depict a quantity for a given area by filling it in with small dots. Because each dot represents a quantity, you can expect that quantity every time you see that dot on the map. 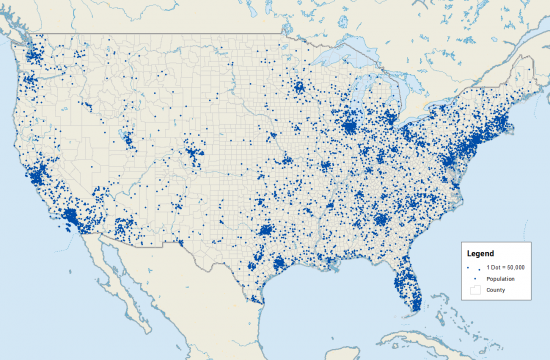 One of the disadvantages of dot density maps is that it’s difficult to extract quantities from it. For graduated symbols or proportional symbols, it’s easy to estimate value based on the size of the symbol. But for dot-density maps, it’s tedious to count small-sized dots for a large quantity.

All three types of maps represent quantities using dots. But it doesn’t have to be symbolized as dots for symbols.

Graduated symbol maps and proportional symbol maps scale the size of the symbol based on value.

But gradual symbols put each value into a class and scales it based on that “bin”.

Dot distribution maps are different because they just add more dots instead of scaling them larger.