Download
You are free to use our lakes and rivers map of North Carolina for educational and commercial uses. Attribution is required. How to attribute? 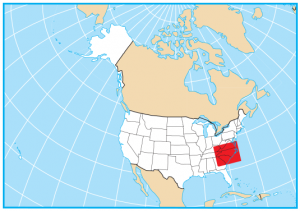 The largest lakes in North Carolina are Kerr Lake, Lake Mattamuskeet, and Lake Norman. But the 48,900-acre Kerr Lake extends out into the neighboring state of Virginia and is a major source of hydroelectricity.

North Carolina has several bays and sounds on its eastern coastline. For example, it includes Pamlico Sound, Albemarle Sound, and Onslow Bay. Some of the major rivers in North Carolina are the Catawba River, Tar River, Pee Dee River, and the Roanoke River.