You are free to use our counties map of Kentucky for educational and commercial uses. Attribution is required. How to attribute? 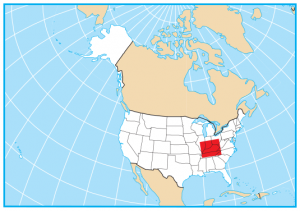 This Kentucky county map displays its extensive 120 counties. In fact, its number of counties represents the fourth most in the United States. Only Texas, Georgia and Virginia have more counties and administrative units than Kentucky.

The most populated county in Kentucky is Jefferson County, which includes the major city Louisville. Next, Fayette, Kenton, and Boone county have the highest population. But the least populated is Robertson County with just over 2000 people.

In terms of area, Pike County is the largest occupying an area 785.7 square miles, bordering both states of Virginia and West Virginia. Robertson County is not only the least population. But it’s also the smallest in area occupying just 100.3 square miles.