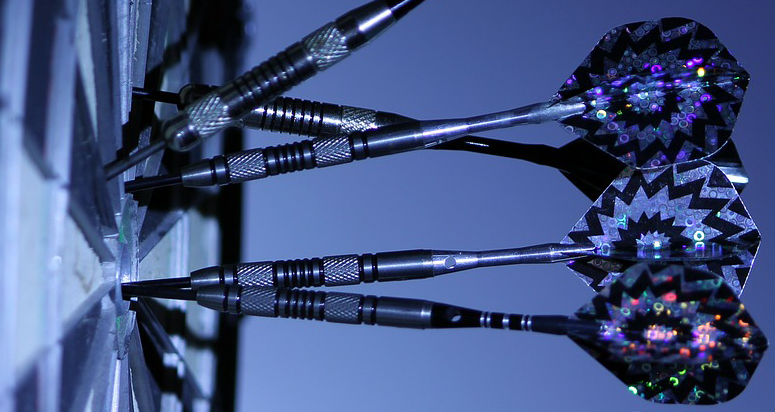 Let’s understand some of the terminologies in regression models.

Let’s put the ArcGIS regression tools in action by building a habitat suitability index (HSI) – also known as a resource selection function (RSF). With 308 GPS locations of marsh deer, we investigate the relationship between marsh deer and their landscape.

Important to note: This is a hypothetical scenario with made-up data.

Habitat Suitability Index (HSI): An HSI is a numerical index that represents the capacity of a given habitat to support a selected species

What are the explanatory variables for marsh deer? This may be the most difficult part of regression modeling. We need to investigate potential habitat types for Marsh deer. This is where expert advice comes in handy. Here’s what we found: 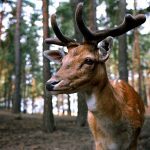 Marsh deer are found in marshy habitats such as floodplains, grasslands, and moist forests, preferring areas with a good amount of cover for protection, such as reed beds or where grass stands are high. This species is predominantly found close to permanent sources of water.WWF

Based on literature, Marsh deer select natural vegetation and water. But are there any land features that potentially disturb Marsh deer? We explore these independent variables using our spatial regression analysis.

Our study area is characterized by natural vegetation and open water. A road cuts through cells A6-F6 which may act as a potential disturbance. Campgrounds are also present in cells B3, C7, and D7. 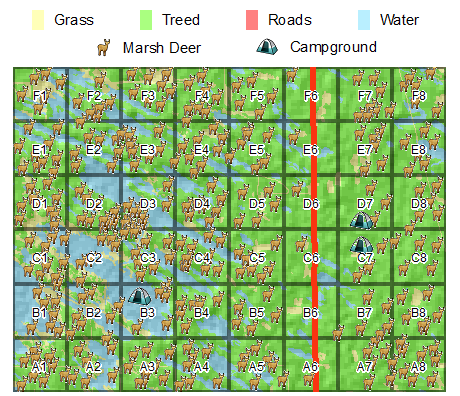 Each dot represents the GPS position of marsh deer. Visually, there appears to be less marsh deer near roads and campgrounds. Another observation is that marsh deer appear denser in cells D2 and D3 where wetlands are present. 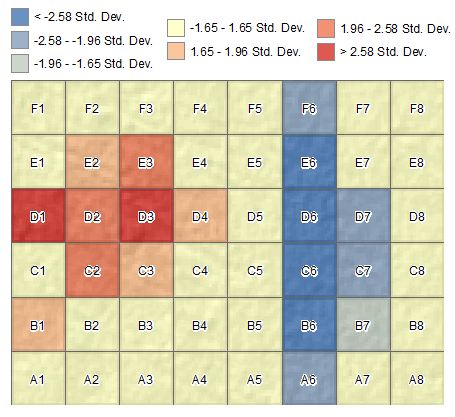 This hotspot map confirms less deer close to roads to a degree of less than -2 standard deviations from the mean. Marsh deer are denser near cells D2. Other than these two low and hotspots, there doesn’t appear to be any more spatial patterns in the study area.

These are the types of questions that can be answered using regression analysis. Let’s use spatial regression to model spatial relationships between marsh deer and land features.

The first step is to group the independent and dependent variables per grid cell. We cannot look at the Marsh deer locations as points. The table must have the number of deers, campgrounds, and wetlands for each grid cell. The table below is an example of a pre-processed table using OLS.

We will use the “Ordinary Least Squares Regression” tool in the “Modelling Spatial Relationships” toolkit.

After running the OLS tool, the residuals of the prediction model will be added to your display. The residuals are essentially the error in the model.

Let’s take a closer look at what a residual actually is before moving forward. If we look at cell A1 (bottom left), there were 9 deer found in this grid cell. The OLS model built weights based on the amount of trees, wetlands, grass, roads, and campgrounds in the cell. These weights are the beta-coefficient values. When the weights were plugged into the regression formula, there was an estimated 6.98 deer in cell A1. When you subtract 6.98 from 9, we get a residual of 2.01. In other words, the model underpredicts the actual value by 2.01. 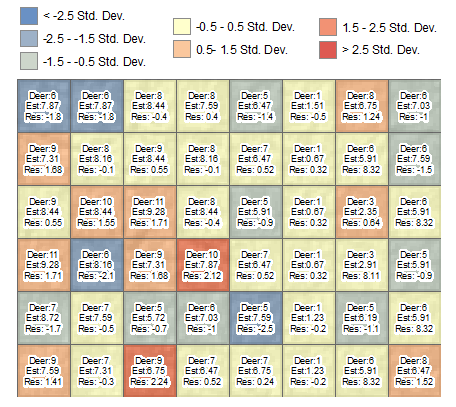 The low negative beta-coefficient of campgrounds (-3.56) can be interpreted as areas where marsh deer avoid. Roads as well had a negative value of -0.52, meaning deer do not select these grids. Marsh deer prefer wetlands as a suitable habitat. This model confirms this belief.

This OLS model achieves an adjusted R-squared value of 0.795. With these 3 factors, we can explain 79.5% of the variation that’s occurring.

What is the model missing? Known predators, forest age, wetland type – include other facets of

Another statistic of interest is the Variance Inflation Factor (VIF). If the VIF > 7.5, this indicates redundancy among explanatory variables. Our HSI model satisfied these criteria with VIF < 2.0.

When this test is statistically significant (p < 0.05) model predictions are biased (the residuals are not normally distributed). The Jarque-Bera Statistic score was 0.721. When the OLS regression models tools give the WARNING 000851 at the end of the report, this means that the Spatial Autocorrelation (Moran's I) Tool should be processed to ensure residuals are not spatially autocorrelated.

When you click OK, a report will be generated. Double-click the report, and ensure that the results are random. 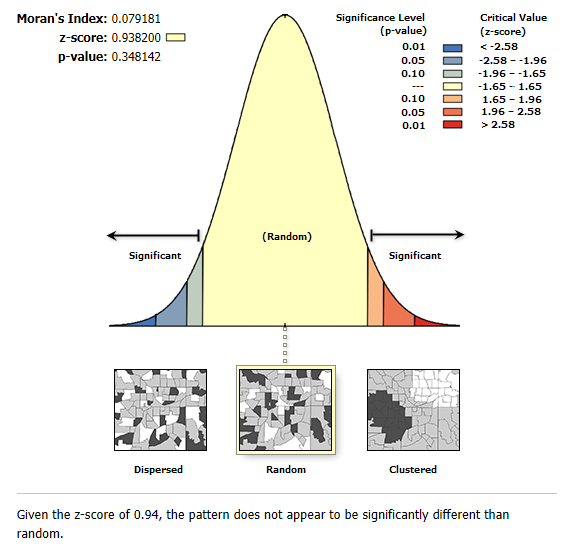 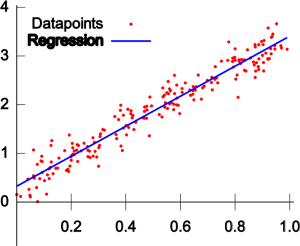 These weights were plugged into the regression formula to calculate and predict the number of deer. The variance inflation factor, z-scores, Jarque-Bera and Moran’s I ensured robustness and statistical significance in the spatial regression model.

The regression model shows how Marsh deer select wetlands as a suitable habitat. It also shows that Marsh deer tend to avoid campgrounds and roads.

This is useful to land resource managers to potentially restrict the development of campgrounds and roads to conserve this type of deer. The regression model can also be used to predict Marsh deer in other areas.