What is Aerial Photography?

The topic of aerial photography can encompass many different fields such as military reconnaissance, geology, agriculture, and more.

But it can also use different means of technology such as drones, helicopters, or airplanes.

This guide will provide a brief overview of aerial photography. How do we use it in GIS? And how is it different from orthophotography? Let’s jump right in.

Just 2 years later, James Wallace Black flew a hot air balloon 2,000 feet in the air over Boston, Massachusetts. This photograph entitled, “Boston, as the Eagle and the Wild Goose See It” became the first surviving aerial photograph to this day.

Since then, the use of aerial photography has come a long way. During World War II, the German military used pigeons for surveillance over enemy countries. These flocks of birds, known as the Bavarian Pigeon Corps, snapped aerial photographs for reconnaissance. But they hardly ever followed the correct flight path or returned the cameras to their owners!

There are several ways to acquire aerial photos. Each one has its benefits and drawbacks for when it’s the best time to use each method of acquisition.

But it’s often the type of study that will determine the type of aerial photography you should use. We’ve provided general guidelines for the benefits of using each type. But keep in mind that every situation is different from one another.

Get to the Choppa! (in an Arnold Schwarzenegger style of voice). Helicopters and airplanes have served as a mainstream option for capturing aerial imagery for quite some time. Here are some of their benefits and drawbacks. 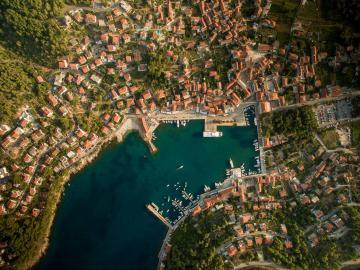 There are hundreds of satellites that already orbit the Earth. Here are the most popular 50 satellites for earth observation. Although you might think this is the most costly option, satellite imagery has come down in cost over the years. Here are some of its advantages and disadvantages. 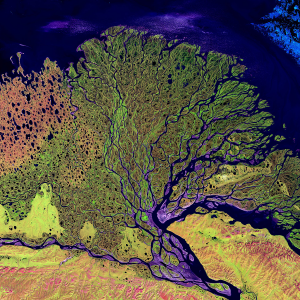 As technology advances, more people are turning to drones as a way to explore their surroundings and understand their environment better. The drone and unmanned aerial vehicle (UAV or drone) industry has seen rapid growth over the past few years, as companies and governments look for affordable ways to get video and photos from remote areas and overhead perspectives. Although this industry is still in its infancy, it’s expected to continue growing at a rapid pace. 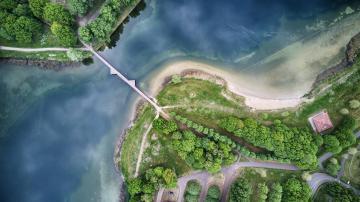 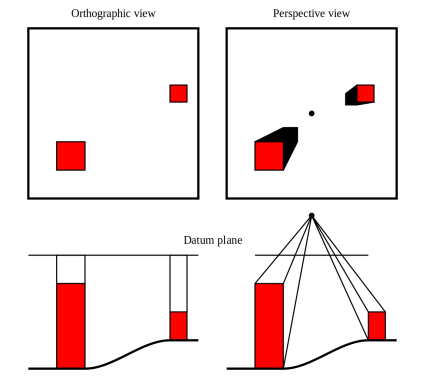 What if you could take an aerial photograph captured in the air, then put it into geographic context? Instead of just an ordinary image, orthophotography gives it real-world coordinates by stretching, scaling, and skewing it into physical space.

An orthoimage corrects the geometric distortion that’s inherent in imagery. Because the orthoimage has real-world coordinates, you can measure distances with it or relate one object to another in the digital orthophoto.

But when you have a collection of images and you geometrically correct them all together, this is the process of creating an orthomosaic. When you merge each image together, you have to carefully take into account color balancing, seamlines, and other factors.

Use cases of aerial photography

The commercial use of aerial photography spans many fields such as agriculture, construction, and natural resource management. This usually involves airborne surveys or imaging to determine land use, plant growth, soil conditions, or erosion patterns.

Aerial photography can also be used for scientific purposes, such as tracking the spread of wildfires, or measuring how much water has been absorbed into the ground from rainfall. Whereas for scientific studies like climate change, it can be a gauge for measuring the rise of sea levels and even melting glaciers.

In contrast, recreational aerial photography typically consists of flights that are taken with camera equipment for the purpose of capturing a spectacular view of nature at its most beautiful moments.

From landscapes to wildlife to urban sprawl, there’s no limit to where you can take aerial photographs. Although they can require special permits and training, they offer an opportunity to see the world from new perspectives.

READ MORE: 5 Free Historical Imagery Viewers to Leap Back in the Past

The term “aerial” means “above the ground,” so a photograph taken from a helicopter, drone, pigeon, or satellite is all technically an “aerial photo”.

Its use cases and applications can range from military reconnaissance, mapping and surveying, and even recreational photography.

Because looking down from above gives a whole new perspective on your surroundings, aerial photography has become essential in environmental data, monitoring crop growth, and collecting topographical information.

And today, aerial photography is an essential part of Geographic Information Systems (GIS) and remote sensing.