How do slope and aspect relate?

But in the mountains, there are slopes in all directions. There are north-facing, west-facing, south-facing and east-facing slopes. The compass direction that the slope faces is slope aspect.

…And there are some unique real-world applications of slope aspect:

Let’s look into this a bit deeper. How do you measure the aspect? And how can we use aspect data for analysis?

The concept of an aspect map is simple to understand. Aspect values indicate the directions the physical slopes face. We can classify aspect directions based on the slope angle with a descriptive direction. An output aspect raster will typically result in several slope direction classes.

Here is an example of an aspect map from the south point-of-view:

If no slope exists, then the cell value will be -1. These are the grey cells in the aspect map above. Where slope exists, aspect is measured clockwise starting north at 0°. It returns back as 360° north again.

Here is how the Aspect tool classifies an aspect map:

The aspect map above is from a south point-of-view. That’s why the shades in the map are mostly light green (south-east), light blue (south) and blue (south-west). When you rotate the map as a north point-of-view, than you see mostly purple (north-west), red (north) and orange (north-east):

How to create an aspect map

You will need a Digital Elevation Model (DEM) to generate an aspect map. Here’s a list of free global DEM data sources or free LiDAR data sources to help you get started.

You only need one input to create an aspect map. That one input is your DEM:

After running the  Aspect tool , the output raster symbolizes based on the direction slope. Each slope direction will represent a slope angle range.

You can reclassify the aspect map by changing the symbology and setting the number of classes. For example, if you only want to display north, east, south, west, and flat classes in the color ramp, you can reduce the classes to 5. From here you can set breaks at -1, 45°, 90°, 135°, and 180°. 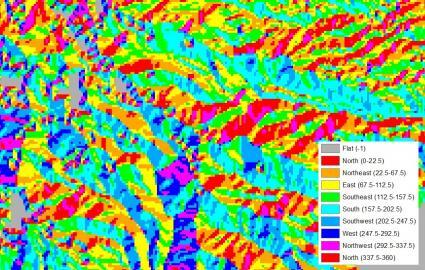 Uses and applications of aspect maps

The direction a slope faces with respect to the sun (aspect) has a profound influence on vegetation, snowpack and construction. On top of that, exposure to wind are being researched as two aspect applications:

MICROCLIMATE: When you expose slopes to sunlight, it creates microclimate conditions. In other words, these are mini-climate areas different from the area around them. For example, there can be a south-facing hill that supports small woody plant species because it is much hotter, dryer, and more desert-adapted. If you compare this to the opposite side, north-facing slopes receive less direct sunlight because of their orientation.

SPECIALIZED AGRICULTURE: Cultivating south-facing slopes in the Swiss Alps using aspect data because it shelters from cold and dry winds which is critical to successful crop growth. Farmers also herd cattle and sheep on the Swiss Alps and move them away from the snow-covered peaks to the valley floor. 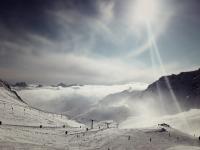 SKI SLOPE SELECTION: Aspect maps are ideal in ski slope site selection because the slope direction determines how much incoming solar radiation directly hits the face of the slope affecting the overall quality of ski slopes. For this reason, planners prefer north, north-west, and north-east slopes for ski slopes.

REMNANTS RAINFOREST: Remnants of rainforest (in Australia) are almost always found on east-facing slopes because it protects from the westerly wind. Also, lower radiation loads result in reduced water loss. This protects rainforests from fires and helps these species survive in these microclimates.

BUILDING CONSTRAINTS: Prohibiting construction on south-facing slopes because they undergo more extensive freeze/thaw cycles. This freeze/thaw cycle can erode the ground beneath and reduce the overall stability. Aspect data can determine these prohibited building zones.

VEGETATION EROSION: Finding the dominant vegetation types dependent on aspect and enhancing erosion modeling using aspect and vegetation to see how slopes will erode over time along with precipitation, temperature, and growing periods. Also, land degradation by interpreting soil erosion and surface runoff has been extensively modeled using its aspect.

The compass direction that the slope faces is your slope aspect.

You’ve learned some unique real-world applications of using the Aspect tool such as mountain agriculture, building constraints, and microclimate vegetation.

Also, you don’t have to express aspect maps only with elevation values. For example, you can represent pH and soil moisture in aspect maps.

Where have you used the Aspect tool? Let me know with a comment below.