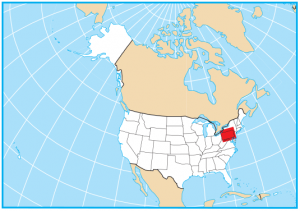 This Pennsylvania map contains cities, roads, rivers and lakes. For example, Philadelphia, Pittsburgh and Allentown are some of the major cities shown in this map of Pennsylvania.

Pennsylvania is like America’s history state. First, it was one of the original 13 colonies, which declared independence in 1776 and formed the United States of America. It was also the site of the American Civil War (1861-1865), specifically during the Battle of Gettysburg.

Pennsylvania is located in the northeast of the United States. It borders Ohio, West Virginia, Maryland, Delaware, New York and New Jersey.