It’s fun to explore your GeoData with GeoDa.

Universities like MIT, Chicago, and Arizona use GeoDa because of its powerful spatial data analysis, geo-visualization, and geostatistics tools.

So that’s what we did too.

Now, let’s check out some if the key feature in the new and improved GeoDa.

Getting Started with GeoDa

GeoDa has an intuitive interface that makes it easy for you to add multiple file-formats like shapefile, GeoJSON, KML, SQLite, and table format (CSV, XLS, and DBF).

To see how your geographic data relates in space, GeoDa provides a variety of base maps from Carto and Nokia.

As shown below, these 4 tools are used to load data, save as a GeoDa project (GDA), close the application, and open attribute data.

Similar to any GIS software, you can resize and move columns freely. You can join tables, query observations, and export data in different formats.

Not much more to say but how straight-forward we found GeoDa to use. The interface is modern and you can get your hands dirty in your analysis quickly. 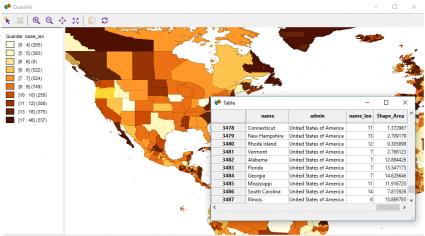 This is one of GeoDa’s specialties – its geo-visualization tools. Anyone can gain insights from their data through the means of visualizations in the forms of thematic maps, cartograms, and map movies.

Really, you get more options than QGIS and ArcGIS in terms of data classification. The maps and rate drop-down gives you an abundance of ways to classify your data.

If you don’t want to use these types of data classification methods, then GeoDa has a Category Editor tool for you to interactively edit custom breaks in the data. The neat thing about is how it interactively generates a histogram as you change the dividing lines in your data. 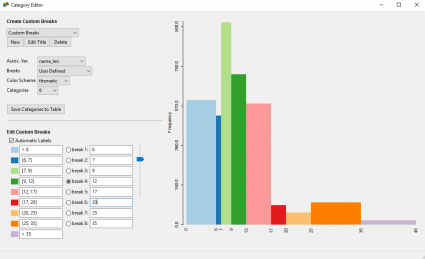 The cartogram tool substitutes appropriately-sized circles to represent a variable. For example, here we see clusters of the population in the United States. 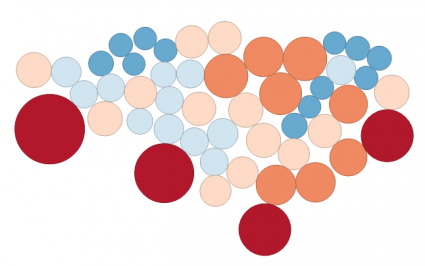 This is also known as Dorling Cartograms. However, the downfall of these types of cartograms is that the centroid and shape are not maintained. This means that readers may have difficulty understanding features on the map. You may not have even known this represented United States population if I didn’t tell you!

For this section, we’re going to hunt down some statistical relationships using the St Louis region county homicide counts and rates.

When you look at this histogram of police expenditures, you can see the distribution of how money was spent is relatively equal across counties. 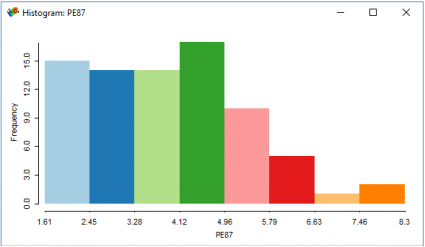 But when you look at the histogram for homicide rates, it’s positively skewed. This means the majority of the data has a low homicide rate, but there are some counties with extremely high homicide rates. 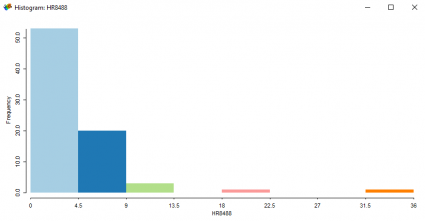 This box plot shows that the median number of homicides per 100,000 people is about 3.7. However, two counties really jump out with enormous homicide rates. Those two counties are St. Louis City (36.0) and St. Clair (20.2). 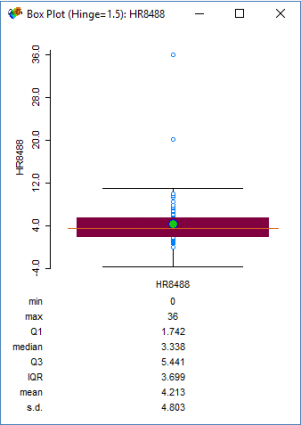 What’s the best way to see how variables relate to each other? For example, how does the resource deprivation/affluence composite variable relate to homicide rates?

Well, we can put each variable on the x-axis and y-axis of a graph and see how it all looks. This is called a scatter plot. 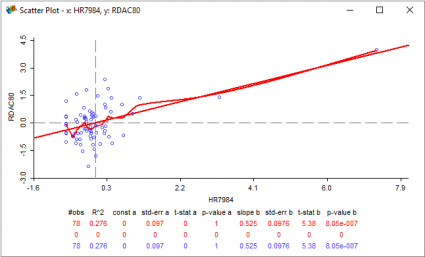 The linear regression curve (straight red line) gives us an r-square value of 0.276. The other red curved line is a LOWESS (LOcally WEighted Scatter-plot Smoother) that fits a smooth curve between these two variables.

So what does this actually mean?

It means that given these 78 observations, resource deprivation accounts for 27.6% of the variance for homicide rates. While a model with an r-square of zero indicates 0% that a model explains none of the variability of the response data around its mean… This really shows there is a partial relationship between these two variables (resource deprivation and homicide rates).

But it really doesn’t end here with GeoDa. If you want to see how a bunch of scatter plots relate to each other, pick all the variables your heart desires with the Scatter Plot Matrix. 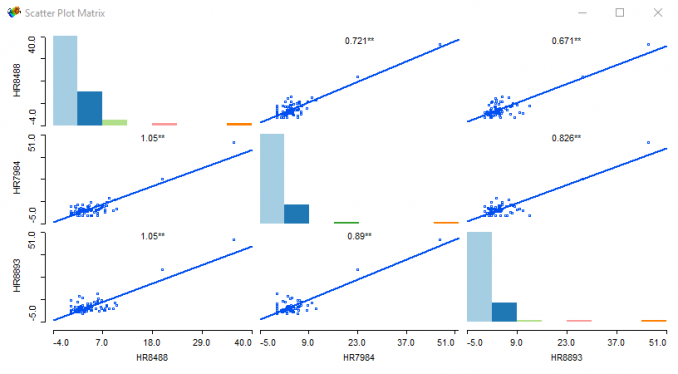 You will have to really put on your thinking cap for Geoda’s 3D scatter plot. I did at least. What this tool does is graphs out three separate variables in a three-dimensional space like this. 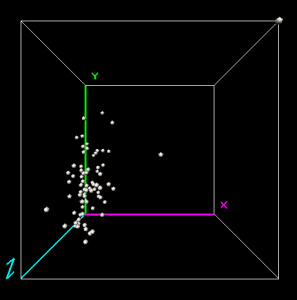 The nice thing about it is how you can project your data points to the XY-axis, XZ-axis, or ZY axis. When you see how the data look on each axis by rotating the 3D Scatter Plot. At this point, you’ll start to understand how data points become suspended in 3D space.

For bubble charts, you select the X and Y-axis variables. Further to this, you choose a variable for bubble size and color. What this enables you to do is cleverly visualize four variables.

Be careful with the size variable as this can really influence your graph. You can right-click the graph and resize the bubble size from small to large. We keep it simple here and use the homicide rates as size. As expected, the two large red bubbles are St. Louis City and St. Clair.

All in all, I am completely blown away by the data exploration tools in GeoDa.

Let’s see how it does with more geostatistical-based tools.

The main difference in this menu is how these types of analyses are performed in geographic space. While histograms, scatter plots, and bubble charts simply analyze data, these next few tools understand how counties and attributes are related to each other in terms of its geography.

And it all begins with setting contiguity in the weights manager. I set the bordering to be in direct contact with one another with either a queen or rook contiguity. This influences the number of neighbors that connect to each county.

Here’s a histogram showing the queen connectivity and number of neighbors: 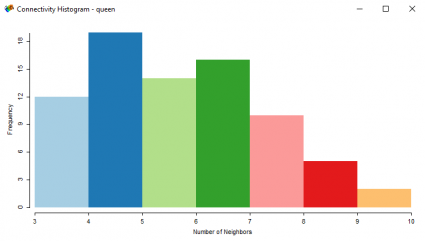 Here’s a histogram showing the rook connectivity and number of neighbors: 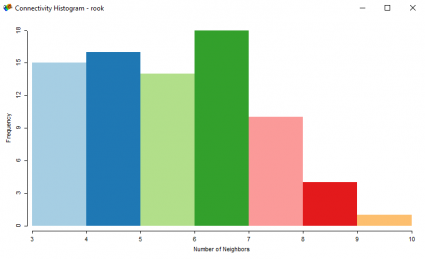 So similar, but different. Geoda offers a map for you to interactively see how the rook and queen connect with its neighbors. Love this feature. 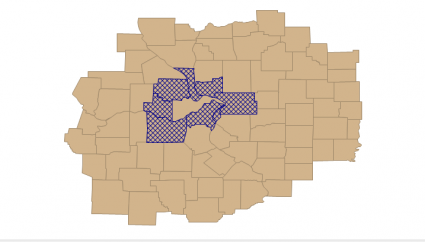 Because we’ve set how counties relate to each other, the moran scatterplot will factor this in.

A value of 0 for Moran’s I typically indicates no autocorrelation. In this case, the Moran’s I is 0.16 meaning that homicide rates are not so much clustered together. 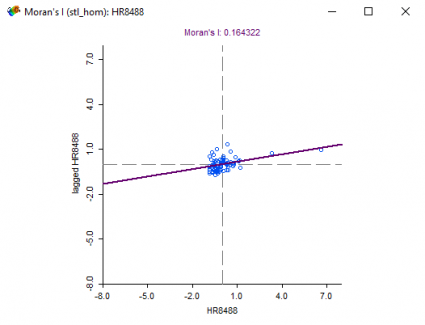 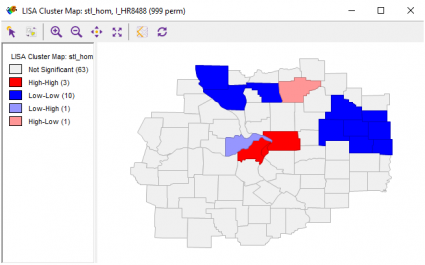 GeoDa can produce univariate, differential, and local Moran’s I with EB Rate as well.

The last tool is a variation to see how data is clustered. In the center of St. Louis, high rates of homicide are centralized in the middle. While, in the north-eastern portion, homicide rates are much lower. 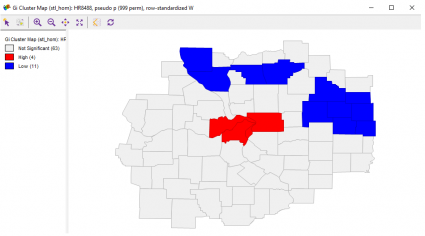 Imagine how useful this is for the real estate industry and those wanting to move to St. Louis. In this case, the G*Clusters map generates the same results.

If you have homicide rates in a city, you can use spatial regression to understand the factors behind patterns of crime. Why are there homicide rates concentrated in the center of St. Louis? Is it police spending? Can resource deprivation explain homicide locations?

Here is some terminology commonly used in regression models.

In our simple model, homicide rates are the dependent variable. While we try to explain high and low homicide rates with police expenditures and resource deprivation. 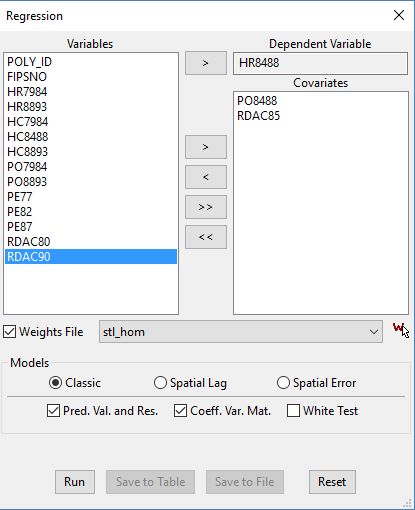 Our output table is as follows:

Another statistic to keep in mind is the Jarque-Bera statistic which indicates whether or not the residuals (the observed dependent variable values minus the predicted values) are normally distributed. When you put these residuals in a histogram, the null hypothesis is that it should resemble a bell curve.

Further to this, the output table also lets you test for multi-collinearity when two or more predictor variables in a multiple regression model are highly correlated. The calculated Moran’s I determines whether the regression residuals are spatially random (spatially autocorrelated).

Other options in GeoDa are the maximum likelihood estimation for spatial lag models and spatial error models.

You’ll have a lot of aha moments in GeoDa walking through some of their sample data. Not only does it serve as a gentle introduction to spatial analysis and statistics for non-GIS users, but it’s useful for those users who are trying to learn statistics.

Luc Anselin started GeoDa as an ArcView 3.0 extension. Due to its popularity, it’s been reworked into its own open source, data exploration tool.

While not necessarily your prototype full-blown GIS package, GeoDa possesses a range of exciting analytical and geo-visualization tools for industries such as economics, health, real estate, and more.

Have you tried putting your geostatistics to the test with GeoDa? Let us know what you think of it in our comments section below.