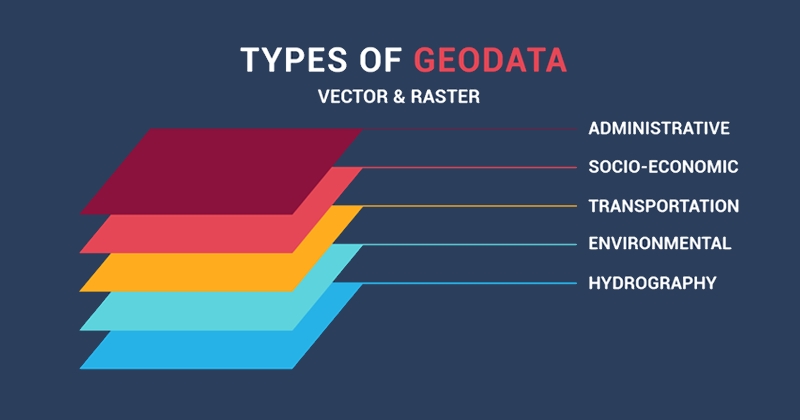 By viewing data with a geographic component, we see it through a different lens.

Let’s dive into the types, themes, and sources of geodata.

As it turns out, there’s not one single type of geodata. Instead, geodata exists in various forms.

For example, we commonly use vector and raster to depict geodata.

→ Click Here to Get a FREE Course in SQL for Data Analysis! ←

Vector data consists of vertices and paths. The three basic types of vector data are points, lines, and polygons (areas). Each point, line and polygon has a spatial reference frame such as latitude and longitude. First, vector points are simply XY coordinates. Secondly, vector lines connect each point or vertex with paths in a particular order. Finally, polygons join a set of vertices. But it encloses the first and last vertices creating a polygon area.

Raster data is made up of pixels or grid cells. Commonly, they are square and regularly spaced. But rasters can be rectangular as well. Rasters associate values to each pixel. Continuous rasters have values that gradually change such as elevation or temperature. But discrete rasters set each pixel to a specific class. For example, we represent land cover classes to a set of values.

As the internet becomes the largest library in the world, geodata has adapted with its own types of storage and access. For example, GeoJSON, GeoRSS, and web mapping services (WMS) were built specifically to serve and display geographic features over the internet. Additionally, online platforms such as Esri’s ArcGIS Online allow organizations to build data warehouses in the cloud. 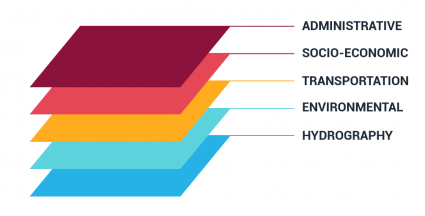 You can group geodata into as many themes as you want. They can be as broad or as narrow to your liking.

Here are examples of geographic themes:

→ Click Here to Get a FREE Course on Intro to Relational Databases! ←

Are you trying to find open, authoritative geodata to use in your maps?

Before the concept of open data took off, organizations were protecting data as if it was Fort Knox. Since then, we are in a much better position.

Currently, there’s no single website that holds all the geodata in the world. Instead, they branch out into what they are most specialized in.

For example, OpenStreetMap data is the largest crowd-sourced GIS database in the world providing countless applications for the public.

From NASA, USGS to the United Nations, these 10 free GIS data sources list the best vector and raster to boost your geodata repertoire.

And finally, over 1000 satellites orbit the Earth collecting imagery of our planet. These 15 free satellite imagery sources give you the most up-to-date bird’s eye view of it all.