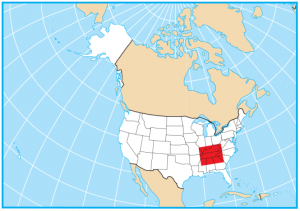 This Tennessee map contains cities, roads, rivers and lakes. For example, the major cities in this map of Tennessee are Nashville, Memphis and Knoxville.

Tennessee has a country music vibe going for it. The country music record industry is big in Tennessee and produces a ton of record deals. But it’s also known for its bluegrass music too.

The state of Tennessee is home of the Appalachians in the southeast of the United States. And the shape of Tennessee is long in the east-west direction and borders Kentucky, Missouri, Arkansas, Mississippi, Alabama, Georgia, North Carolina and Virginia. This is tied for the most with the state of Missouri, with each bordering 8 other states.